According to an online poll, three quarters of migraineurs erroneously believe that they’ll have to suffer from migraine disorder for the rest of their lives. A frequent statement in migraine land is “Migraine can’t be cured, there is no miracle cure for migraine.” — How do you answer such an odd statement? “I can’t ride home, as there are no unicorns” follows the same logic. What about a horse or a bike, instead of a unicorn?

Sure, drugs can give some relief from attack symptoms, but they can’t solve the underlying problems. In a catchy phrase: Drugs don’t end the tyranny!

What is The Migraine Revolution?

The tyranny will continue to keep migraineurs sick and in limbo, grateful for the prescription drug and seemingly doomed to a life of suffering. It will continue unless somebody stands up and shouts: “Enough with this nonsense!” and others stand up as well. The Migraine Revolution is shouting “Enough with this nonsense!” and we’re asking you to stand up as well.

The Migraine Revolution is a global, grassroots initiative to raise awareness for and to spread scientific knowledge about migraine as a complex disorder of body, mind and brain.

Why does the world need The Migraine Revolution?

Suffering from migraine is an occasional nuisance for some and a frequent/constant tyranny for others. The overall impact and burden of migraine on society is enormous, the economic damage alone is calculated in billions of dollars.

The current treatment regime is dominated by medication to suppress attack symptoms. In order to keep their paying customers dependent on drugs, the regime’s propaganda portrays migraine as “a kind of headache”: as a symptom without an underlying disorder! That is a bizarre, yet very clever concept to suppress defiant ideas of therapy and rehabilitation, of tackling the glitches in body, mind and brain which lead to the attacks. The Migraine Revolution is the uprising of helpful scientific knowledge and successful clinical experience against the oppressive terror of misinformation by the current regime.

What are the goals of The Migraine Revolution?

The main goal of The Migraine Revolution is to end the migraine tyranny by providing all migraineurs with the knowledge and support to pursue a successful rehabilitation of their individual condition, thereby leading to relative or absolute cessation of attacks.

Is The Migraine Revolution publicly funded or sponsored by an industry?

The Migraine Revolution is politically, morally and financially independent. In order to achieve economic sustainability, our own publishing company is selling educational media, e.g. a scientific patient guide for migraine sufferers. Books for professionals are in preparation. The Migraine Revolution neither claims nor wishes to be a charity organization, nor do we ask for donations or public financial aid.

Any affiliations to confess?

The originator and author admits to being a member of the Applied Neuroscience Society of Australasia (ANSA) and of the International Society for Neurotherapy and Research (ISNR). He has accepted an actiCAP EEG acquisition system from the German company BrainProducts for review. Neither of these entities can be held liable for the achievements of The Migraine Revolution.

Why did you call it “Revolution”? You should have picked a more peaceful name!

Let’s face the facts: We’re up against millions of websites, books, migraine forums, patient blogs etc. that keep spreading the current regime’s propaganda; often with the generous support of the pharmaceutical industry and their sales representatives. For example:

“Migraine is a kind of headache” asserts that one of the attack symptoms is the ailment. No underlying condition required? How bizarre is that?

“Migraine is swelling and inflammation of blood vessels in/around your head.” Of course, that must hurt. Sure, it doesn’t even try to explain all the other attack symptoms (like neck pain and stiffness, nausea, dizziness, sensitivity to light and noise, teary eyes, stuffy or runny nose …). And it doesn’t explain why migraine has such an abundance of co-morbidities (= conditions that are more likely to occur). But it helps to seduce patients to rely on medication only. And that’s what patients are for: patiently suffering and paying for drugs.

“Migraine is genetic.” Well, what does that mean? Period pain is genetic too: Men are genetically protected from period pain. The phrase “… is genetic” explains nothing, but makes patients feel even more like helpless victims. That’s good for drug sales, but not good for affected patients.

Will you stand up with us and say “Enough with this nonsense!” ?

How can I support The Migraine Revolution? (I don’t have much time though.)

1. Like and follow us everywhere: Suscribe to our information channels on our website, on video sharing sites and on social media platforms to stay in touch and receive notifications and updates. Of course that is free of charge and you can unsubscribe at any time with a click on a link.

2. Share the message of The Migraine Revolution with your friends, foes and family, as well as colleagues, contacts and acquaintances; for example via social media, telephone, letters, smoke signs, pigeon post, morse code or Chinese whisper. Or in short:

Click this link, if you think: “Why should I join?”

Migraineurs get done over: 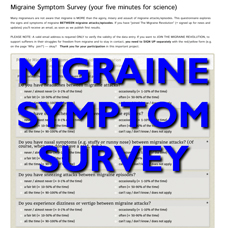 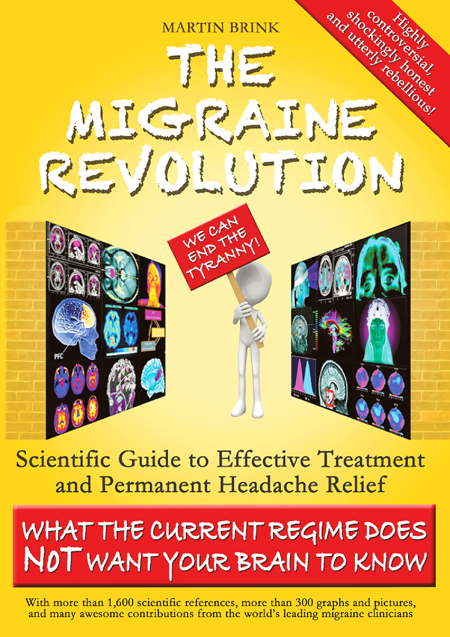 Not quite sure yet? 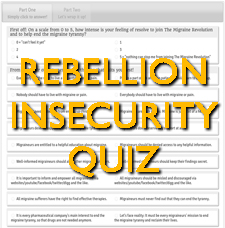